The Problem with Micro Plastics

We’ve all have been hearing the term microplastics popping up everywhere (even in our salt), but what exactly are they? Microplastics are small barely visible pieces of plastic that are between one micrometer (one millionth of a meter) and five millimeters in size. Microplastics are not a specific kind of plastic but is rather any type of plastic fragment that falls within those size parameters.

Where do they come from?

All plastics are manufactured industrially. They are made by bonding carbon and hydrogen together in long chains called polymers. Chemical additives are added to give plastics different properties. There are 2 types of microplastics, primary and secondary. Primary microplastics are those that were manufactured in this size to be used mainly in cosmetic products like body wash and toothpaste. Secondary are a result of larger plastic products breaking down into smaller pieces. Some of the common sources are packing materials, fleece clothing, industrial scrubbers, and tires.

Why are they a problem? 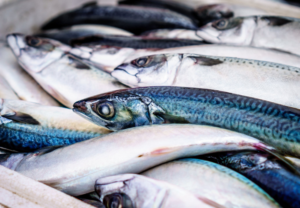 Plastics are manufactured to be very durable, they take over 300 years to naturally breakdown. Plastics tend to find their way into bodies of water, like oceans and rivers, and will remain there until action are taken to remove them from the water. Since microplastics are so small it is nearly impossible to remove what is already in the water.

Ocean animals have a hard time distinguishing plastic from their normal foods. At least 180 species of marine animals have been documented consuming plastic, from tiny plankton to gigantic whales. Plastics have been found inside the a third of fish caught in the United Kingdom, including species that we regularly consume as food. Plastics have also been found in other mealtime favorites like mussels and lobsters. Microplastic specifically, can become embedded in animals’ tissue through ingestion or respiration.

Microplastics consumed by sea creature make their way up the food chain and eventually end up on our dinner plates. Fish is the primary source of protein for nearly one-fifth of the human population. The microplastics ingested by fish and crustaceans can be subsequently consumed by humans as the end of the food chain. In a study done at the State University of New York, 18 fish species were sampled, and all species showed some level of plastics in their systems.

As mentioned before many plastics have added chemicals to give them different properties. These chemicals make their way into the water ways, and on to our plates. Some of these chemicals can be very dangerous when consumed by humans, or other wildlife.

Can we filter them out of our water?

On the larger scale however, wastewater treatment plants are having difficulties removing microplastic. It has been reported that particles captured in wastewater treatment sewage sludge can range between 65% and 100%. This is largely because current facilities are not designed to retain microplastics – meaning that sewage effluent leaving many plants still contains fibers and microbeads that ultimately end up in rivers, lakes, estuaries and oceans.

There are several remedies in development, some have pointed to the adoption of finer filtration methods – perhaps making use of sand – as a potential means of further minimizing, or eradicating, the dispersal of microplastic to the environment. Another technique known as centrifugation is also a possible solution. Centrifugation uses the action of centrifugal force to promote accelerated settling of particles in a solid-liquid mixture. Both have potential but there has yet to a be a clear solution to the microplastic problem.